The ASX, like sharemarkets globally, is rallying on an optimistic growth story. The one potential hiccup, say fund managers, is inflation, writes Sarah Turner.
keyboard_backspace Back

How to invest in a toppy market Edited by Debra Cleveland: dcleveland@afr.com

The ASX, like sharemarkets globally, is rallying on an optimistic growth story. The one potential hiccup, say fund managers, is inflation, writes Sarah Turner.

This month’s bullish prediction by the International Monetary Fund of the highest growth on record for 2021 confirmed what sharemarkets are already banking on – the global economy is firing up.

The IMF upgraded its 2021 global growth forecast to a record 6 per cent, and the fastest expansion since the IMF started measuring global growth in 1980.

Sharemarkets are rallying into recovery – US markets have long since surpassed records and Australia’s S&P/ASX 200 index is within touching distance of its February 2020 record of 7162.

But scaling the dizzy heights of a market record also brings doubt about whether this is as good as it gets and if the only way forward is down.

The good news for investors is that economic growth appears set to power along. The flip side is that an economic recovery can trigger inflation and higher interest rates.

“There’s a feeling in markets that we could be set up for a potential multi-year demand recovery story globally and that could potentially be analogous to the post-World War II period,” she says.

If that’s the case, sharemarkets are set to continue to rally on a highly optimistic view of global growth. Fisher puts it this way: “If there’s any phrase that’s like crack to markets, it’s co-ordinated global growth.”

Australia has managed the pandemic better than the rest of the world and it’s unsurprising that the Australian market is nearly back at a record, she says.

It has been late regaining its high compared to markets such as the US, with a lower weighting to technology companies than the S&P 500, for example.

The year-long advance for the ASX was driven firstly by technology companies and other stocks that do well when investors are unsure about growth, and then by companies that win from strong growth.

Economists are bullish on Australian growth this year, forecasting GDP growth of 8.7 per cent for 2021, according to the latest quarterly survey from The Australian Financial Review.

Consumer confidence is at an 11-year high, the unemployment rate is falling more rapidly than expected, and business investment is finally starting to pick up.

Paul Taylor, who manages the $5.6 billion Fidelity Australian Equities Fund, says: “I think we’re starting to get into that recovery phase now.”

The recovery has been underpinned by accommodative monetary policy and stimulatory fiscal policy, and those supports are unlikely to drop away soon, says Taylor.

“I think we’re going to see that stimulatory environment continue for a while,” he says. “That’s quite a positive environment for equities.”

The February reporting season confirmed to Hamish Tadgell, who manages the SG Hiscock SGH20 Fund, that a growth recovery is under way.

Earnings upgrades started last October and then, with vaccine rollouts, investors started to move from “hope to growth”. “I think reporting season confirmed that,” he says.

Investors will need to see more earnings growth for the market to move up from here, Tadgell says. That looks quite possible, given his view of growth.

“I think through the course of this year, growth should continue to recover and markets should hold up.”

Of course, there may be a correction after such a strong run, he says, but any such weakness is likely to be a short-term buying opportunity. He holds Cleanaway, Qube Logistics and Uniti in his portfolio.

Ways to play it

One way investors can take advantage of a market rallying into an improved global growth environment is through resource companies. Taylor says resource companies have already performed quite well but continue to be positioned for gains.

“They are not just linked to Australian growth but global growth,” he says, and in particular, Chinese growth. BHP is one of his big positions and Mineral Resources is another portfolio pick.

Banking group Macquarie is also linked to the global growth story, he says, with financials broadly set to benefit from a steepening yield curve. He owns insurer Suncorp in his portfolio as well.

“If we move away from ‘helicopter’ money to more targeted infrastructure spending, then engineering firms like Downer will probably benefit in the long term,” Taylor adds.

The post-coronavirus economic rebound has swept the Australian housing market along with it, and Fisher says Wesfarmers’ Bunnings operation, furniture retailer Nick Scali and building materials supplier James Hardie stand to benefit from the shift.

“We think this COVID-19 recovery story grows into a housing recovery story,” she says. This extends to companies that cater for Australian consumers and are linked to housing, which “[are] potentially set up for a multi-year demand story”.

Taylor says the housing recovery story, like the gains for the sharemarket, and the influx of retail investors into the market, reflect an environment of near-zero interest rates. Investors are left with little alternative other than investing in equities - “You have to put your money somewhere.”

Markets look reasonable value with interest rates near zero, Taylor says. Australian investors are likely earning a 3 per cent to 3.5 per cent fully franked dividend yield from ASX companies, he points out. The market is trading around 19 times price earnings, which is “a little high”, but consensus expectations are for earnings growth of about 20 per cent this year.

He is relatively relaxed about the market from here. “I think that we will look back at this time and think, ‘That was an excellent time to invest in equity markets’.”

The cloud on the horizon for investors is the inflation outlook. They fret that strong demand, coupled with COVID-19 supply chain issues and weak comparatives from last year’s mass lockdowns, are set to trigger high and sustained price rises that will force central banks to raise interest rates.

Given how supportive low interest rates are for markets, it makes sense that any whiff of higher rates has the potential to cloud the bullish market mood.

The advance to a record for the ASX stalled earlier this year after an inflation scare took long-dated bond yields rapidly higher at the end of February and in early March.

Central bankers have been at pains to say that they are not considering tightening policy. 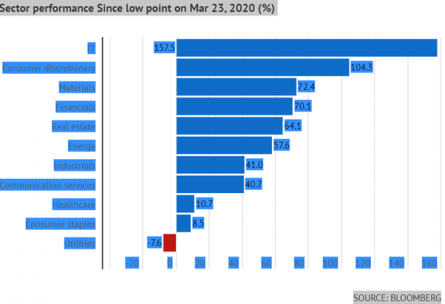 The Reserve Bank of Australia has nailed interest rates to 0.1 per cent until 2024, and the Federal Reserve has pushed back hard against any suggestion that it could start to reduce asset purchases or tighten policy while inflation and unemployment remain outside its targets.

But in a reminder that higher rates could be on the horizon, the Bank of Canada started down the tightening route this week by announcing it will start to buy a lower amount of bonds reflecting the “progress made in the economic recovery”.

Canadian inflation is expected to reach the bank’s target range “some time in the second half of 2022” instead of 2023, the bank forecast.

“The fly in the ointment is inflation,” says Fisher. “I think the big tail risk is that inflation gets out of hand. If so, every asset class globally is overvalued.

“It’s not my base case but it’s certainly a tail risk. A lot of the companies that we speak to are talking about price rises on the back of high input costs.”

Shares can do well in the early stages of an inflationary environment if higher prices reflect improving global growth and earnings.

“I think in the early phases, the local market focuses on the reason for the interest rates going up, which tends to be more growth and a better environment,” says Taylor.

Until official cash rates reach about 5 per cent, investors tend to be relatively relaxed and then they start to worry about the effect of higher rates on the economy, says Taylor.

Tadgell says inflation is likely to increase in the short term. “We saw this in the GFC and in 2011 when inflation got above 5 per cent in the US.”

That rise proved temporary and soon subsided, but the jury is out on whether the same thing will happen this time, “Whether it’s more permanent, I think, is hard to tell at the moment,” says Tadgell.

He says that one way to manage inflation worries is to invest in companies that have pricing power and are able to pass on rising input costs and maintain margins.

“I think it also means investing in companies that are the sort of quality cyclical companies that will benefit from the recovery in the cycle.” Commodities outperform in a higher inflationary environment. If there’s an inflation breakout and regime change, all equities are likely to come under some pressure, Tadgell says.

But in a relative sense, the more cyclical sectors, such as the banks, could perform better than companies that are “long duration” – or rely on investors taking a long-term view of their earnings prospects, he believes.